It marked one of the biggest margins of victory since the back to back wins in1872 and 1873 of 100% by George S. Bowen when he ran unopposed those years.  Those victories were the best since the six Chicago Bulls championships between 1861 and 1868…wait am I remembering those dates wrong?

Anyway, in the midst of these political happenings about town, Elgin also saw a new building erected at 107 E. Highland Avenue in 1885.

Today, this building sits within the Elgin Downtown Commercial District that is on the National Register.  Bounded roughly by Division, Villa Center, Fulton and Grove, the district is the newest established in Elgin. 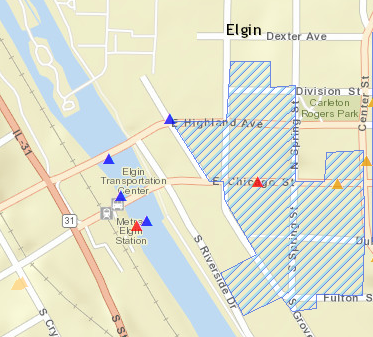 The Elgin Downtown Historic District was nominated under both Criterion A and C as described by the nomination:

for [its] local significance for its associations with commercial and business development between 1873 and 1964 in Elgin, an industrial satellite city of Chicago. From early shops of the late 19th century, to the arrival of department and chain stores in the early to mid- 20th century, this grouping of historic structures served as the first major business center of the community. It also was the transportation and government heart of the community. The district is also eligible under Criterion C for its architecture, with significant historic commercial structures in designs representing a 19th – and 20th -century urban business district in a smaller Illinois city.

107 E. Highland, also known as the Klinger Saloon because of the first business housed in the building, is one of those historic commercial structures contributing to the district.

107 E. Highland is of the Italianate style, specifically Commercial Italianate.  Main Street blocks across America are home to Italianate structures, and the Fox Valley area is no different.  After this post, take a look around Elgin, or West Dundee or other main street downtowns and this style is sure to jump out at you.  (Not literally, of course [I hope]).

Thus, this building being of the Italianate style and situated near the main street epicenter of Elgin marks a synthesis of two architectural points. First, about when 107 E. Highland was built and second, when the city of Elgin began growing as Italianate styled blocks were popular between roughly 1860 and 1880.

“So enough blabbing already!” you say?  Not to worry, I hear that regularly in my life.  I also hear a lot of “that joke wasn’t funny the first time” and “aren’t you a little old to still think that is funny?”

Without further delay, some of the main architectural characteristics of the Italianate style are as follows: Throughout the years it has been listed in city directories as a number of addresses including: A few non-sequiturs, if I may (which I will and you cannot do anything to stop me!) about the address and name differences I casually mentioned above.  City Directories are another incredible source of evidence and information for architectural historians because they not only help us narrow down when a building was built or when a person moved into a new home, but they also help us trace those trends once we have our sights squared. They can be a headache at times, however.  Instances like the Morris, Moritz discrepancy are a semi-regular occurrence.  Luckily in this case I already knew the address, so when his name changed slightly I knew it was the same person

However, that situation would have been much more difficult if for instance I was looking to follow a particular dude named Morris and then ignoring the Moritz if I came across that instead. Human error, language barriers and a number of other hypotheticals can lead to inconsistencies but not to a rate or degree in which they make City Directories obsolete.  Rather, their systematic publication (many of these city directories in later years would at least have sections that resemble the phone book we know today with telephone numbers also showing up with addresses) trumps many of the relatively small errors I mention above.

OK! Back to this building.  Similar to just about any American town at the turn of the century where saloons and bars lined many a city street, the denotation of “beer bottler” is a relatively uncommon occupation, particularly in a smaller town like Elgin.  For instance, the rest of the same page from 1887-88 shows everyone else on that list with jobs such as “watch factory worker,’ “laborer,” “grocer,” “barber,” or “blacksmith.”

While the occupation may have been slightly different than many other Elginites’ the men at 107 E. Highland were quite popular (another likely explanation for why there are so many connected addresses: expansion).  By around 1903 107 E. Highland was clearly labeled as Pabst Brewing Co., seemingly switching over from saloon to full on bottling production. In 1913 it is listed as “vacant” and 109 E. Highland is listed as “Home Lunch Restaurant.”

Now this is where I become a history detective and give you my take on why I think in 1913 we see a switch from PBR bottler to a restaurant. [Pause for applause]

This shift most likely occurred because of Elgin’s change in liquor laws. In the early teens, Elgin saw a rise in anti-alcohol proponents speaking out and pushing for a change in the law.  This matches a similar trend in the rest of America which culminated in the well-known Volstead Act, and the subsequent 13 years of Prohibition. I surmise, then– surmise since I have city directory information and little other direct evidence — that because of the proposition for Elgin to go dry, the aforementioned restaurant may have been a farce by the bottlers so they could keep bottling.

In “Elgin: Days Gone By,” E.C. Alft writes that ‘[d]espite several sensational raids on stills and speakeasies, Prohibition was never effectively enforced locally.” Alft continues on the failures of local measures by describing how “[t]he Elgin Ministerial Association warned that ‘any ordinance attempting to regulate or legalize the sale of beer in the city of Elgin is unwarranted, ’because the new federal and state laws did not repeal the local option decision favored by a majority of Elgin voters in 1914.”  Per Alft in his book “A History of Elgin History,” 1914 also saw the close of 37 saloons in Elgin Township thanks to a local referendum with the famed Elgin Eagle Creek Brewery forced to follow suit a few years later boarding up its doors in 1919 with direct orders of the Volstead Act.

And that, folks, is my take on the history of 107 E Highland as it dealt with Elgin’s transition to a dry city.

WHAT IS IT TODAY?

Today it stands as a retail space in the heart of downtown.

Pedaling Preservation is very excited to announce that we will be giving a presentation at this year’s Elgin Literary Festival!  Put on by the wonderful folks over at Side Street Studios, PP cannot wait to hear all the other wonderful speakers, panelists and featured readings.

The dates for the festival are January 29 and 30 at the Hemmens Cultural Center.

We are going to talk about the blog, what we do, and how we feel about Elgin all while trying not to succumb to nerves like Dee Reynolds in that episode of “It’s Always Sunny in Philadelphia” where she attempts stand up comedy.

Head over to their Facebook page for more information and don’t forget to check out all the other amazing events Side Street puts on.