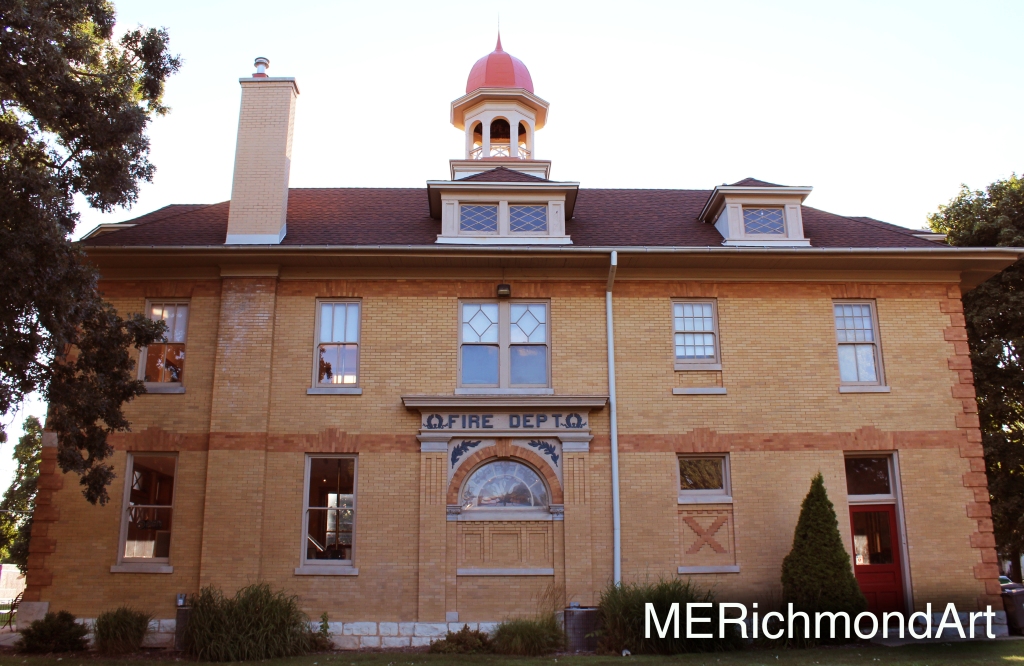 Thanks to everyone who read, shared and (just guessing, totally not hyperbolizing) fell madly in love with this blog. I think blogging here in Elgin is going to be a wonderful time.

This week, we are taking on Elgin’s Fire Station 5, historically named Fire Barn 5, it was the twenty second fire station built in town.

Just kidding, it was the fifth.

Located in a triangle shaped property between St Charles Street to the west, Arlington Avenue to the east and Bent Street to the north. The facade faces south where the intersections of St Charles and Arlington meet at 533 St. Charles Street. (In the preservation lexicon facade means just the front facing side of the structure, all other walls are referred to as elevations) 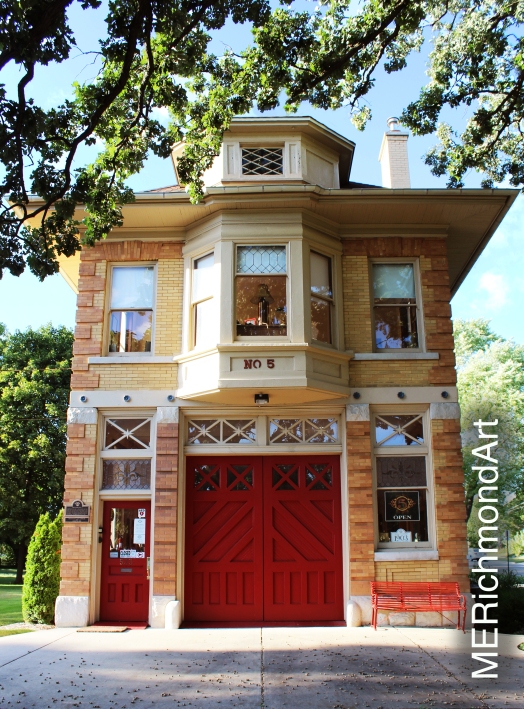 What a beaut! Designed by architect Smith Hoag and built in 1903, Fire Barn 5 was the last of the Elgin firehouses to be equipped for horse-drawn fire fighting vehicles. 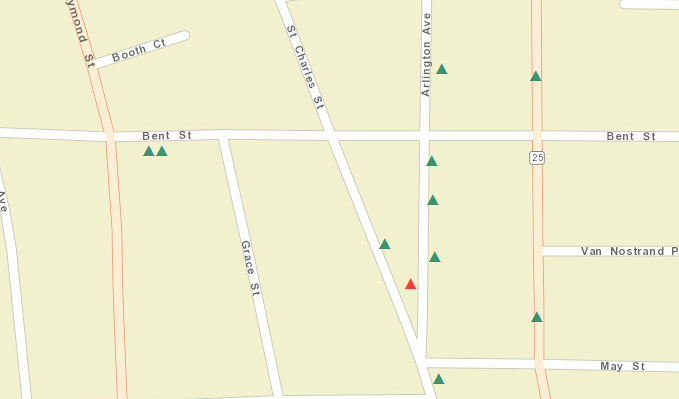 Situated southeast of the main downtown, Fire Barn 5 is marked as the red triangle in the map above.  It was built here for the anticipated growth in this direction away from city center. It sits within the Elgin Watch Factory Historic District and was nominated under both Criterion A and C meaning it was important for the events surrounding the building’s history as well as the  architecture design itself. The periods of significance for this structure are split into two pieces, one being 1903 – 1933 and then from 1939 to 1941, with the 6 year gap representing a period in which the fire house was closed as a cost-cutting measure for the city.

Fire Barn 5 is a Classical Revival structure. Yes, that is the same style as last week, but let me hit you two facts right quick.  One, I wanted to do another Classical Revival to show how different buildings can be even when labelled under the same stylistic definition.  Second, I wanted to use Fire Barn 5’s criterion C status to talk about how some things can be nominated under arhcitectural status while others do not.  Third (I lied, there will be three facts right quick) it will be cool and fun so deal with it. 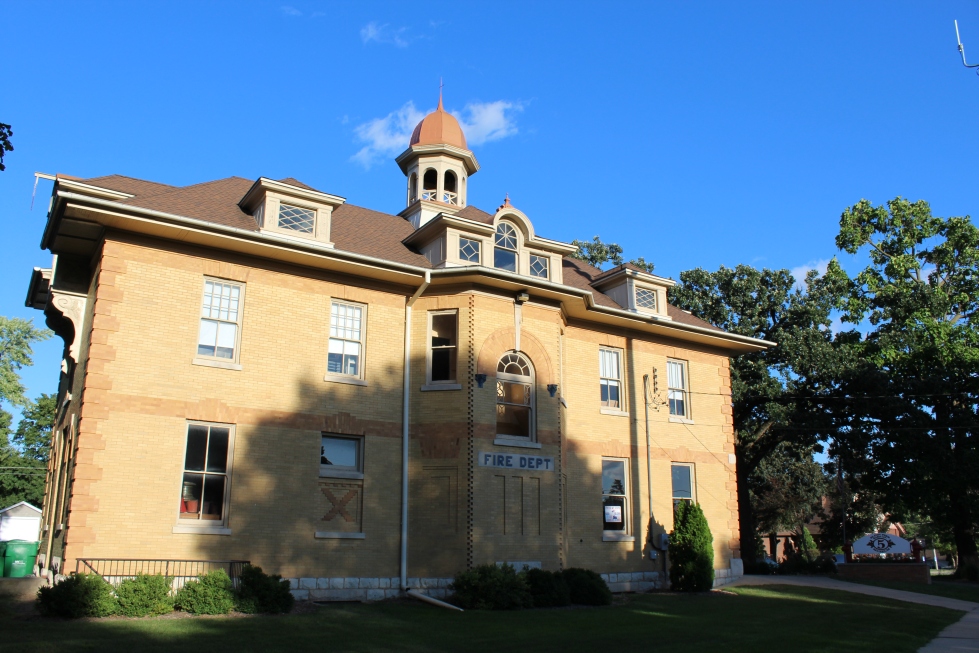 Many of the features are the same as the Classical Revival we saw last week including:

But there are some differences that make Fire Barn 5 stand out.  In fact, as a brief non-sequitur, at the time it was built this fire house was the considered the most elaborate in Elgin.  To give a little context as to why this was prevailing thought, the combined cost of fire barns 3 and 4 from the turn of the century was $6,262.  The cost of Fire Barn 5 in 1903, only a few years later, was $7,737.

Here are some different features featured on this Colonial Revival: 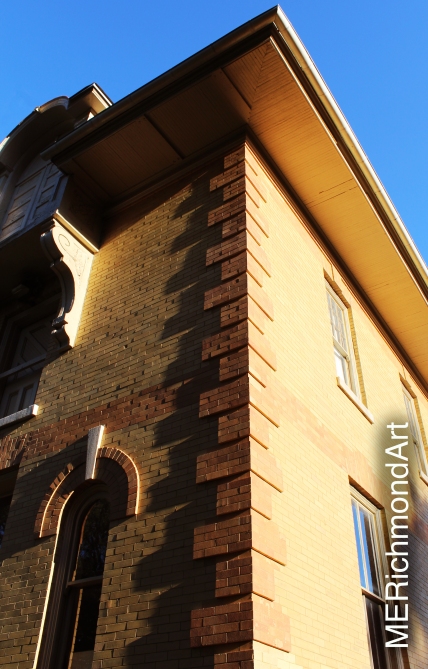 Seen in the photo above,  quoins are decorative staggering brick patterns, protruding on the corner of a building. Made popular largely due to necessity, they began as a way to cover up any errant masonry that existed when stone walls had to turn a corner but quickly became more and more a way to add a touch of class to an existing elevation. 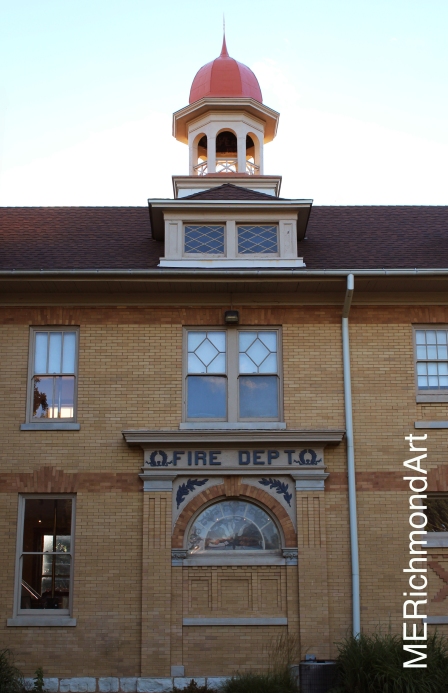 Dormers are a window opening at the roof level which you can see in the above picture just below the cupola and again in the photo below in the next section.  Finials (another sweet term) are defined as a pointed decorative ornament sitting atop either a cupola (as seen here), roof, canopy, etc.

In James Howard Kunstler’s book The Geography of Nowhere, he writes that “…this classicism was an architecture worthy of the forward-looking, rationalistic culture of big business and big industry that America had become at the end of the nineteenth century.  It was calming, orderly, elegant.”

This, too, is what Fire Barn 5 represented.  At the time it was built in 1903, Elgin was a booming town seeing a huge influx of money and residents thanks in large part to an industrial, economic powerhouse in the form of the Elgin Watch Factory.  Its location represented a changing and growing Elgin population density.  Its elegance marked a growing respect and desire for fire management.  And, its structural design spoke to an understanding that newer technology would play an increasingly important role for firefighters.

In fact, per the National Register nomination, the fire barn was made to fit a 1896 all steel horse wagon built in Chicago by the Fire Extinguisher Manufacturing Company but by 1916 the fire house started transitioning to motorized vehicles.

Newer and better trucks and equipment continually joined the fleet until in 1933 Fire Station 5 was shut down due to a squeeze on municipal spending.  The men were moved to Station 1 and between 1933 and 1939 other residents occupied the building with the National Register nomination naming only one by name: Trygve Rovelstad. A beloved Elgin-area artist, he is known for his sculpture “Pioneer Family Memorial” which sits near the Gail Borden Public Library. Read up on him a bit more, he’s an amazing artist and human.

Unlike many of the buildings I’ve posted about that are known for, or on the National Register of Historic Places for their association with an event or events defined within a specific historical context, Fire Station 5 is additionally noted for its architecture (known as Criterion C).

As I mentioned before, at the time it was built, Fire Station 5 was the most expensive fire house in the city.  This elevated level of care in craftsmanship was no accident by architect Smith Hoag. I’ll let the NR form take it from here:

“…elginites no longer thought of fireman as a drunken bunch of rowdies, as they had when fireman were all volunteers.  now fireman had become professionals and heroes to many. fire barn 5 reflected this new professionalism. elgin’s fire barn 5 exemplified the ‘golden age’ of fire station design.”

With a growing city and booming technology, firemen were gaining more respect for the work they were doing. With proper funding, ample public support, and the needs of a fire house leaving a lot of room for different designs, Hoag went with the classic and regal proclivities that the Classical Revival style afforded. 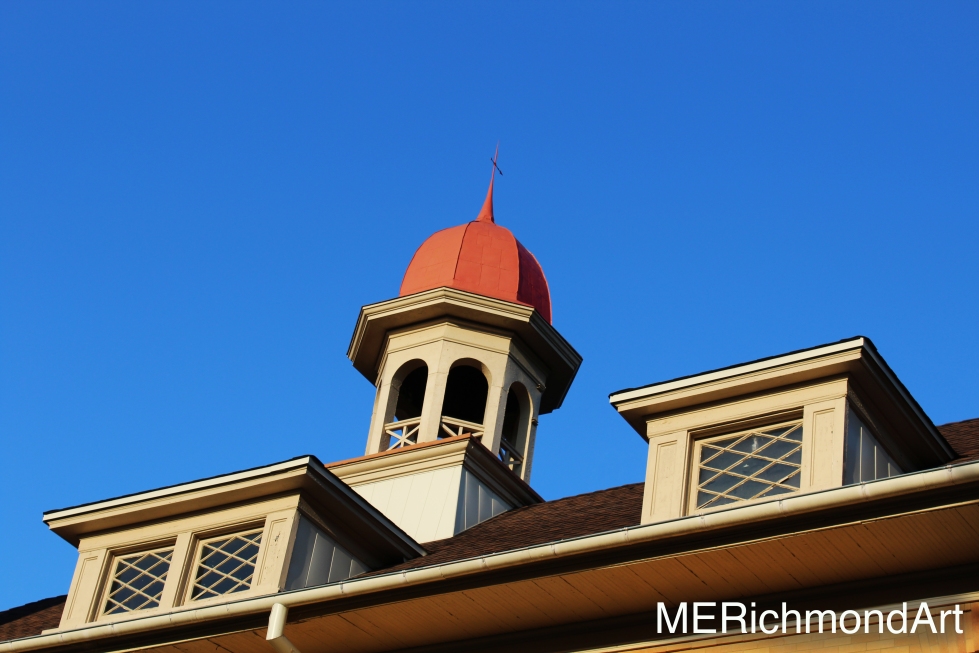 Speaking of the architecture, the above picture is another good way to see the finial, cupola and dormers, but more than that I hope — even if faintly — you can make out the inscriptions on the inside of the cupola because they are signatures of past Elgin firefighters.  The ones we could make out on the day we took pictures look to date from the mid-1930s.

And if I may geek out for a moment, standing there looking at the names is one of my favorite exercises in history.  I think about who might have wrote it and what it looked like inside the cupola when all the names were freshly painted. Who was the first one to sneak up there and write their name and how did other men decide to put theirs up there too and make it tradition? Maybe someone in the 1930s stood right where I was standing 80 years before me and scoped out their name they just finished painting. These connects to past people, the everyday commonalities that can remain — even if seemingly insignificant — are what make me love history so much.  They saw what I see even if in a different light, at a different time, under vastly different contexts but we now share a story.

After an impressive 88 years of service post-construction, the Fire Station 5 was retired from service in 1991.  Of the 5 fire barns built by the City of Elgin, the NR nomination form notes it is the only one in which almost all of the structural integrity remains intact. 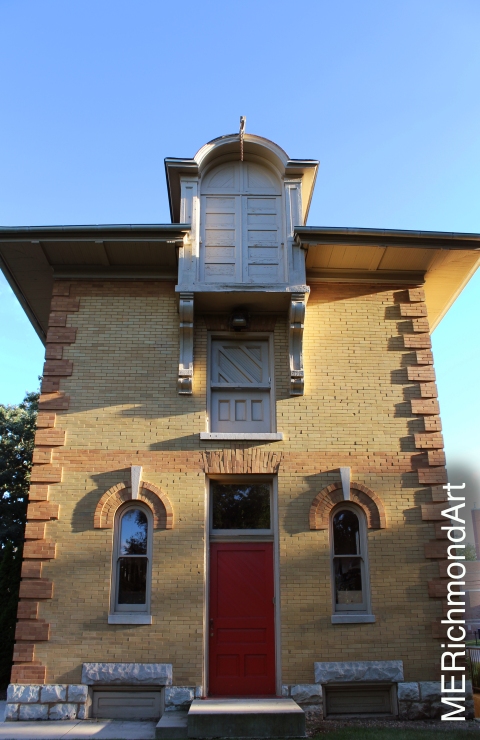 Its history remains intact largely because of the efforts of the community to not only get the building listed on the National Register of Historic Places but also honored as a City of Elgin Landmark.

The memories of past firefighters from Fire Barn 5, among other firefighter’s and fire barn’s histories are kept alive thanks to the Elgin Fire Barn No. 5 Museum, and they do a wonderful job!

For those of you in the Elgin area, September 17 through the 20th is the Elgin Fringe Festival. It’s going to be a fantastic time, with a lot of great artists. AND while I don’t want to name names, someone (Maddie) who is not me (it’s Maddie) who is also involved with this blog (Maddie) will be featured so go check it out!  Here is the link!