On September 19, 1988 the United States baseball team was on their way to winning the Olympic tournament in Seoul, South Korea.  At the same time 6500 miles away in the Milwaukee suburb of Wauwatosa, Wisconsin, I was born.  A cheesehead by birth, (and Bears fan by disappointment to my family) my Wisconsin-based architectural legacy was preceded nearly 120 years earlier by the birth of Frank Lloyd Wright in Richland Center, Wisconsin.

In his 20s Frank Lloyd Wright left America’s Dairyland to try his hand as an architect in Chicago, Illinois (where I lived for 5 years — and I lived in city proper not in the suburbs and then lied and said Chicago to sound cooler).  After landing a job with the well-known firm of Adler and Sullivan, Wright moved to Oak Park, Illinois to build him and his wife their home and his personal studio (the city where my Dad and Step-mom live and where I spent snowmaggedon 2011, an actual blizzard).

Without exaggeration — obviously as I’m a very serious person — these connections between Wright and I basically mean we are the same person and I will have the same amount of fame in my lifetime,  just sayyinnnngggg.  I mean, you all have seen how good my drawing/drafting skills are on my previous posts where I’ve used MS Paint, so get your autographs now, folks.

Wright’s formative years with Adler and Sullivan mark the maturation of a man who would later spend years searching and brainstorming for an architectural style that would be uniquely American.  Thanks to his work and the people he inspired, I lend my thanks as they then inspired this week’s post.

We will get more in Frank Lloyd Wright’s connection to this week’s post, the Amter House, as we go on.  But without further introduction, here is 222 S. Fairfax Street. 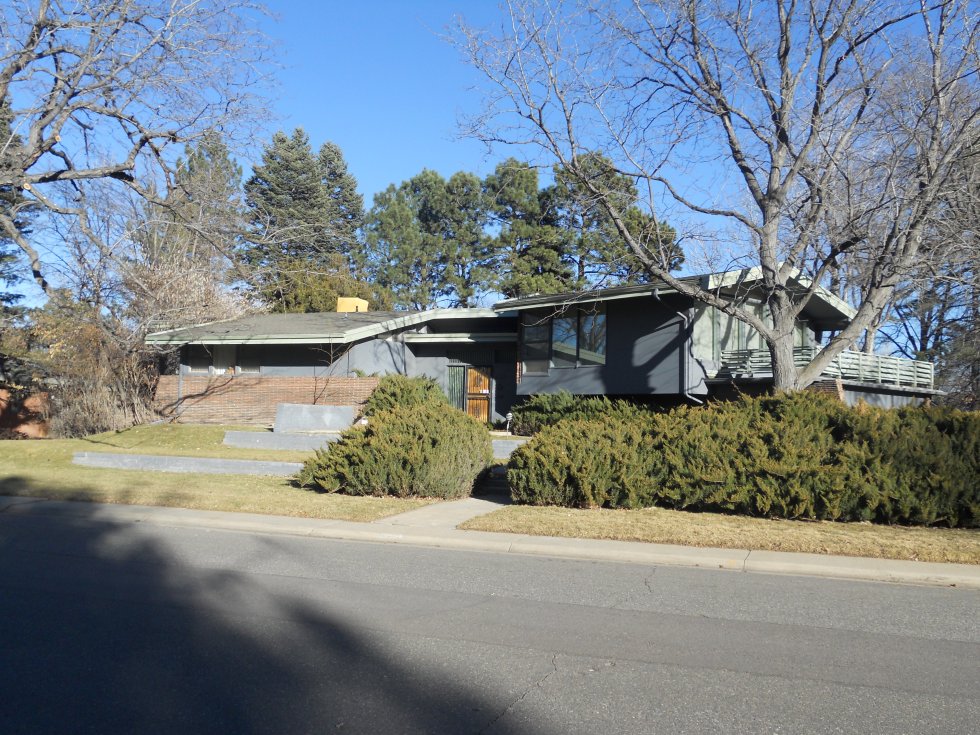 The Amter House sits one lot south of the corner lot on the eastern side of S. Fairfax Street in between Cedar and Alameda Avenues. I took this photo facing east.

Built in 1954 by architect Joe Lort a “second generation” student of Frank Lloyd Wright’s styles, the Amter House is named as such for its first residents.  The legacy continues as their daughter continues to live in the house to this day.

In May of 2009, the city of Denver’s Landmark Preservation Commission passed a council bill that addressed the Amter House’s architectural significance.   The document cites both the significance of Joe Lort’s architectural prowess in designing a beautiful home in the eye-catching Frank Lloyd Wright style as well as the role this house plays in showcasing the shift to the mid-century modern style in this portion of Denver.

This is the first house I’ve done for this blog where I didn’t either know the architectural style right away or recognize the style once I looked it up.  I thought it was some sort of Ranch, but multiple sources have indicated that 222 S. Fairfax Street is based off of Frank Lloyd Wright’s Usonian style.

So what are the main defining features you ask? Even if you didn’t, I’m sorry because that’s what I’m talking about next.

A few of the main defining characteristics that the Amter House has include the following:

• One-story
• Horizontally oriented
• Traditional materials like wood and stone (With the same materials used inside and out!)
• Wide overhanging eaves
• Flat or low-sloped gabled roofs
• And while you can’t see it from the outside, a marker of the Usonian style is radiated heating that originates in the floors of the home (making it more sleek and modern than traditional radiated heating mechanisms).

You can see many of those characteristics just in the picture above.  While many examples of the Usonian style that were actually designed by FLW himself more commonly exhibit a flat roof, 222 S. Fairfax has the low-sloped side gabled roofs, keeping in line with the style.

In red, I marked where the elevation corners are with a vertical red line, and then the (mainly) horizonal lines are the overhanging eaves of the roof. In very straight lines that surely any ruler could even not come close to replicating.

In the above picture you can also see Joe Lort’s use of wood and brick on the exterior of the home.  I didn’t go inside, because that’d be classified as B&E, but Historic Denver has a mid-century modern house tour which the Amter House is part of, and there are a few pictures of the inside from people who went on the tour that corroborate the use of wood and brick inside and outside.

Text on the webpage about the tour also mentions that the inside does indeed use the floor-based heating that FLW used in his Usonian designs.

Joe Lort definitely channeled Frank Lloyd Wright with 222 S. Fairfax and much like FLW’s other popular style, Prairie, you can quickly see the horizontal focus of this structure.

Before moving on to the history section I did just want to quickly discuss that it is important to remember that FLW did not design this house.  Another architect, Joe Lort, did and while I’ve discussed FLW a lot in this post its only because his history and design context are important factors on this design, and  FLW was obviously highly influential for Lort.  Therefore, the design doesn’t have to be exactly how FLW would do it to be of the style, so there are some differences between FLW and Lort for the record.

While many other Usonian homes have a car port, the Amter House has a true garage.  But in this case, it matters more that there is a designated space for a car at all rather than focusing on the differences between carports and garages.

For instance, PBS has this to say of FLW and his Usonian design and his understanding of the car’s increasing importance in American’s lives:

In the 1920s this dream evolved to encompass the explosion in car-ownership, a mode of transportation Wright declared eminently democratic. Wright felt the car, along with other forms of modern communication, would spell the end of the centralized city.

With this explanation, what was an explosion in the 1920s was multiplied by a million percent by 1954 when the Amter House was built.

Post-WWII car ownership marked not only the newly acquired material wealth for so many Americans but changed the way Americans lived by driving (good pun, Kim!) them out of city centers and into the outskirts or suburbs. Men came home from the war and met a thriving American economy, money in the bank, and the desire to start a family.

Fairfax and the surrounding streets in this area are filled with Ranch style homes and ones like the Amter House that reflect the style of post-WWII boom not only stylistically but more importantly with attached garages.  Places like Los Angeles, a city built for the car and by the car, was a place where many people who bought newly built homes after in the 1950s would get a car with their home, marking it both as an element of determining social status and its role as a commuting necessity.  While Denver isn’t as car dependent as Los Angeles, you can see just from the Landmark map earlier in the post that this is further away from the city center of Denver meaning a car is relied upon more.

But the garage isn’t the only important element that showcases its historical context since 222 S. Fairfax was built in 1954 — the era of the Ranch house.

Ranch houses are similar in some aspects to the Amter House — one story, low-sloped gable roofs, attached garages or carports — but what differs with this home compared to those contemporary Ranch styles is that this home takes much more of a stand stylistically.  That is, Amter House is a FLW-inspired Usonian design, not your typical ranch home.  The Cold War, Red Scare-based fear that proliferated after WWII meant Americans were cautious of taking any sort of stand, including standing out with their chosen style of home.  For many, being similar to your neighbor was not only a way of fitting in, but a way to avoid any misguided suspicions brought upon you or your family.

That said, some ranch homes during this era, and obviously the Amter House, still typifies the sleek and modern elements that started gaining momentum in the post-WWII period, as people wanted to transition out of the heavy ornamentalism that defined the previous Victorian era.

It’s still owned by the daughter of the original owners and it is still looking great!

222 S. Fairfax is also often featured on tours run by Historic Denver on their “Mid-Century Modern Architecture in Hilltop” tour.  Hilltop being the neighborhood of Denver the Amter House resides.

Thanks for reading! See you next week!